The final mesocycle of the In-Season was a continuation of the approach I established over the summer: relatively low volume and high intensity. After seeing good results from this in the previous mesocycle, I wanted to make sure that it was sustainable by continuing in the same vein.

It worked. I added another 3 Watts to my 20-minute power, but the biggest improvements were higher up on the power curve, including 25 W on my previous best 5-minute power and 48 W on my 2-minute power.

I think all this was due to a substantial increase in my anaerobic capacity (W' in the scientific literature). This value represents the amount of energy available for continuous work above Critical Power (also known as anaerobic threshold or FTP); whenever you do a hard effort this energy depletes at a rate proportional to how far above threshold you are, and doesn't recover until you drop below threshold. Once it's used up, you will drop down below threshold, and must stay there for an extended period before you can ride hard again.

Plugging my data into analysis software suggests that my W' is around 38-39 kJ, which is a huge number, especially for a 44-year-old. Typical values, even for racers, are much lower — according to the open dataset of Golden Cheetah, the middle third ranges from 14-21 kJ; my value is above the 99th percentile.

I've been extremely cautious reaching this conclusion, because these numbers are so unusual, but in this mesocycle I've specifically gone out and got true maximal values for a range of durations (yes, this hurts a lot), and it seems it really is true.

One implication of this is that typical assumptions about the results of a threshold test lead me astray. Since riding for 1 hour at maximal intensity is an extremely unpleasant undertaking, the much more common approach to determining your critical power is to ride for 20 minutes and subtract 5% from the resulting average power. This test is still horrible, but much more palatable than the alternative.

On my test yesterday I got 306 Watts for 20 minutes. Taking 5% off this gives a CP of 292 W. But if you take into account my W' value, my true CP is probably more like 278 W. This is because, just like anyone else, on a 20-minute test I go harder than I could for 1 hour, i.e. above my CP, and can use up my entire W' over the course of the test. Since my W' is much bigger than normal, this means that simply taking 5% off the average power overstates what I could do for 1 hour, because 5% is only a rough estimate and to the extent that it holds true it only does so for riders with a more typical anaerobic capacity.

The upshot of this is that although my 20-minute power is around the 70th percentile, my CP is only around the 60th.

It's important to know these values, since they show what kind of rider you are and how you respond to different types of training. As I've suspected ever since I started riding in groups, I'm clearly a rider who's strongest at making short, hard efforts. In some ways my big W' hides my lack of aerobic aptitude — it makes me look better than I really am. Where I've always come undone is in the latter stages of a long and hard ride, because anaerobic capacity is much less resilient to fatigue than aerobic endurance.

I like to think of anaerobic capacity as like a battery that lets me temporarily ride in the red zone. Once I drop back down to an easier pace, the battery can recharge so that later I can make another hard effort. But inefficiencies in the system mean that both the rate of recharging and the extent to which the battery recharges diminishes over the course of a hard ride, as fatigue sets in.

I'm guessing that if I was to have a biopsy of my thigh muscle, they'd find I was at the high end for fast-twitch fibres. Much of anaerobic capacity is derived from these fibres, which are much more powerful but much more fatiguable than slow-twitch fibres. That means that we fast-twitchers, being relatively dependent on our anaerobic ability, succumb to fatigue much earlier than our more aerobically-inclined slow-twitch brethren, whose own muscles keep chugging along like dependable diesel engines.

I think reducing my riding volume has allowed my fast-twitch fibres to become more glycolytic (anaerobic), and less oxidative (aerobic), which is why my already quite high W' went through the roof. The downside of this would be if I wanted to do a longer ride, such as the 100 km challenge I did in May. There I averaged 244 Watts for 3 hours, which no doubt would be well beyond my capabilities if I tried that again now. Obviously, the same thing would apply to a road race or hilly grand fondo like those I did in previous summers, where I'd have a much harder time now than I did then.

But the more I've thought about this, the more I've realized that I don't actually want to do these kind of efforts right now. I want to optimize my riding for speed over short durations; that's what I most enjoy and what motivates me. So I want to reconfigure my training with this in mind.

How should I go about doing this? I'll be talking about this in much more detail soon, in my annual training round-up, but basically my performance increases over the summer have confirmed that the direction I've been heading, in particular the much lower cycling volume, is the right way to go. I'm an intensity responder, so I need to train like one.

This doesn't mean going crazy every day, but it does mean working out what form my hard workouts should take, finding the optimal spacing for them, and in the interim making sure to ride at an appropriately easy intensity and duration.

That brings me onto another tweak I've made to my training, based on the realization that my base ride intensity is probably too hard. I've gradually let it creep up into a region that's probably at or above my aerobic threshold. If I'm riding at this intensity on easy days, that will work my fast-twitch fibres when they should be recovering. This could be why, although my 90-second to 5+ minute power has greatly increased, my power over the shortest durations, especially peak power, has dropped off over the last couple of months.

However, I still think that continuous pedalling is a very good thing for my aerobic fitness (provided I'm going at a low enough intensity and a high enough cadence). And I've become good at doing this, consistently hitting 99% pedalling while moving on my base rides over the last few months.

Obviously, the intensity restriction only applies to regular Base rides, not to Tempo rides, where riding around aerobic threshold is the specific goal. But now I've decided to restrict the Tempo rides to the Post-Season endurance build phase. The rest of the time, my base rides will be much easier.

Another thing I'm going to heavily focus on is strength training. I've been doing this for a while, just as a supplement to my riding, but now it's going to be a first-class component of my training plan. This means a lot of heavy weight-training and on-bike neuromuscular work (overgeared sprints, standing starts, and high-cadence leg speed drills), with plyometrics emphasized later, from the pre-season onwards.

I'm planning on setting up a barbell station in my garage, complete with platform and power rack, so I can build a lower-body-focused program based around squats and deadlifts, 2-3 times per week, from October to April, and continuing at a lower frequency through the summer. My dumbbells will now be used for assistance work. I'm going to set aside the required space; the only problem will be actually getting hold of the equipment, as it seems it's in high demand and short supply due to the ongoing pandemic.

I think there are some potentially big gains to be had from this. Although my anaerobic capacity is great, my peak power is nothing special at all, just like my critical power. I expect both of these to be improved, possibly a great deal, by increasing my strength. And I'm planning on increasing my strength a lot. 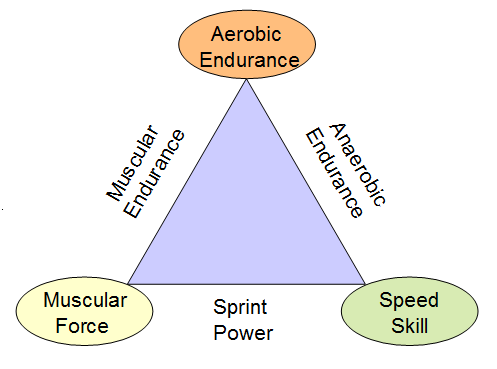 The basic (corners) and advanced (edges) abilities, courtesy of Joe Friel. Training the basic abilities to either side of an advanced ability is expected to improve that advanced ability; both sprint power and muscular endurance (the ability to work around CP) should therefore be improved by increasing muscular force (i.e. strength).

If I can add a couple of hundred Watts to my peak power, this combined with my anaerobic capacity will make me much more of a force to be reckoned with in a sprint situation. And obviously, increasing my CP would mean I start using my anaerobic capacity later, and to a lesser extent, on a hard effort.

So my training is going to become quite similar to that of a kilo rider on the track. There'll still be aerobic work, but it will be greatly deemphasized compared to what I was doing in the past, especially over the winter. I don't know if this will work, but it'll be fun finding out.

So I've now come to the end of the In-Season phase. I'll do a low-volume fun week next week, which will be followed by two rest weeks before moving into the Post-Season. The Post-Season has a lot of aerobic work, and weight training that will start off relatively light, gradually increasing in intensity, to lead into the full-on strength work of the winter.

I can't wait to get started, although I'm definitely ready for a break before I do.