This block marked the start of a 3-month experimental phase with which I'm going to close out the season.

I've reduced my training time, averaging around 12 hours per week on the bike throughout this period, and upped the average intensity (although much of this intensity increase is a consequence of the reduced base load).

Analyzing my ride data over the past year or so that I've had my power meter showed that I appear to respond much better to intensity compared with volume. The two graphs below show my VO2max, first versus volume and then versus intensity. The trends are clear:

You can see that higher volume hasn't lead to increased VO2max values, whilst higher intensity has. There are other factors involved that could possibly confound the data (especially my lack of recovery during my highest volume phase last year), and VO2max isn't the only important aspect of performance (more on this below), but nevertheless I judged it prudent to at least try completing the remainder of the season with a lower-volume-and-higher-intensity period to see what effect this has on my performance.

What this means in practice is knocking a few hours off my endurance-pace riding, while increasing its speed a little — still low intensity, but closer to my aerobic threshold than previously.

Furthermore, I've also been thinking quite a lot about my strengths and weaknesses and the kind of riding I enjoy the most, and therefore what goals I want to focus on. 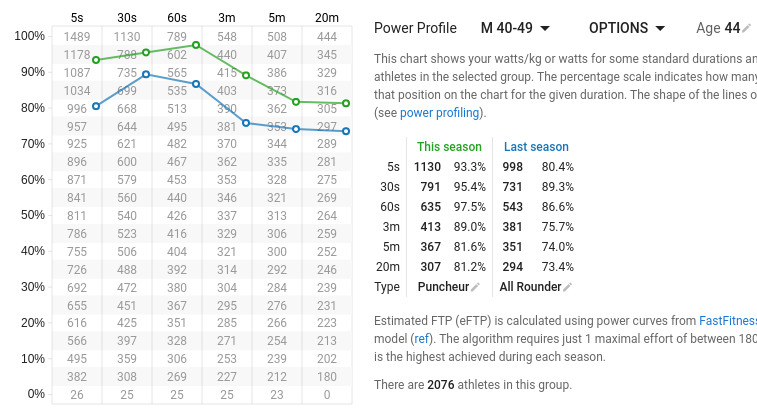 My power numbers, and comparison with other intervals.icu users

My numbers have increased across the board this season, and it's now even clearer that my strength is over relatively short durations. I'm still not so much a pure sprinter as a kilo-type rider; I'd make a decent leadout man as I'm pretty good going flat out from about 400 metres all the way up to a mile or so. My 30-second power should be higher. I added 132 Watts to my 5-second power and a whopping 92 Watts to my 60-second power; 30-second power should logically be somewhere in between. I think I just haven't got it right technically, and also my bike hasn't been changing gears very cleanly under load so there's a big drop-off when I shift. One thing I can try is starting in a bigger gear with no shifting for the full 30 seconds and see what that gets me (and this is something I want to start doing for training purposes anyway).

There's a notable drop-off over extended aerobic efforts, and indeed I find these a bit of a slog. I've remarked previously that by far my least favourite duration on a profile test is 5 minutes, and it does look like I've under-performed on them relative to 20 minutes (I'd expect my 5-minute percentile to be closer to half way between 3 minutes and 20 minutes, given the relative anaerobic:aerobic contributions).

So, other than possible cumulative year-on-year increases, what's changed in my training since last season that's lead to these improvements? A big factor must be reduced volume. I'm on target to hit 700 hours this year, compared with 900 last year. And if I maintain the recent changes I'll be down around 600 hours next year. So it really does seem like this volume reduction at least doesn't hurt my performance, and may in fact be actively beneficial.

I think the main benefit of this has simply been due to much more focus on recovery: rather than grinding out an endless string of big weeks I'm incorporating regular periods of reduced load. High volume itself might not be bad, and could even help, but of course it has to be balanced with recovery, which was something I was awful at last year. Any future increases in volume will be approached with caution.

The other big factor in my improvement is likely my much bigger focus on strength and power. All year I've been much more consistent with my weight training and plyometrics, in addition to which I've regularly been incorporating maximal sprints into my training rides. From the research I've studied, it's clear that strength training has substantial beneficial effects on peak power, anaerobic ability and cycling economy.

Despite this, it's often neglected by amateur riders, even serious ones who want to be racers. It's their loss; I'll be renewing this focus over the off-season period that goes from November all the way through to early March. That's when I do twice-weekly lower body sessions, whereas right now I'm only doing one per week because I found that that's all I can handle alongside the harder rides of the summer.

The good news for me is my strengths are what I enjoy. I like short, hard efforts on the bike: I respond well to — and have great compliance with — my Sprint Repeats workout; I relish 30-60 second blowouts at the end of a run-in to a sprint point on a group ride; I do best on short segments on Strava.

So for next season I want to maintain working on 1-minute power as a primary focus. It could be argued that I've got relatively less to gain here, but I think that this isn't necessarily true; I won't know until I try.

In any case, this doesn't mean just hammering out anaerobic repeats and neglecting aerobic work: a 60-second effort is the point at which there's a roughly 50:50 balance between anaerobic and aerobic energy supply (it's actually about 10 percent phosphagen, 40 percent anaerobic glycolytic, and 50 percent oxidative), so in fact aerobic ability is equally important for this duration, and given my numbers it does look like this is where I've got more potential for improvement.

Another important reason to work on my aerobic ability is to increase my Critical Power, so that I can preserve more of my anaerobic energy for when it's really needed. In other words, work on my weakness to preserve my strength. At the moment my best estimates are that my CP is around 290 Watts and my W' about 30.5 kJ. This latter number is very high for a 44-year old, while the CP is nothing special. It might even be that my CP is a bit lower than this, and my W' even higher.

If I can get my CP up over 300, this would have a huge impact on preserving my W' balance until the sharp end of a competitive situation, and every additional Watt is important. The question is, what's the best way of doing this?

That brings me back to my training modifications. As I seem to be an intensity responder as opposed to a volume responder, I've reduced my easy ride durations whilst increasing their intensity close to and around my aerobic threshold, as well as maintaining the amount of higher-intensity work. This reorganization has led to modifications to some existing rides, and the addition of a new ride.

In particular, my Base and Endurance rides are now more focused; instead of just noodling around for many hours at a time, I've made pedaling time and sticking to the target HR/power the key goals, rather than duration (which has been reduced in accordance with the experiment).

These changes were made in an effort to boost my aerobic power and endurance in a more efficient (and hopefully more effective) way than just going for big, easy volume. This may work better for an intensity-responder like me, in contrast to a volume-responder who would thrive more on lots of long easy riding.

My latest Threshold Test was okay; just a 3 Watt gain in my 20-minute power, but combined with continued weight loss and considering the smaller training load, this is a decent improvement over six weeks.

The final six-week mesocycle of the season will be similar to this past one, with a few further modifications: a reduction in target intensity on the weekend Free Rides (i.e. more severe-domain and less extreme-domain work, especially power zone 6; this should make these rides more similar to the Group Rides that they're currently standing in for); a little more aerobic threshold work on the Base+ rides; and a more distinct volume pyramid (rather than doing the same hours each week).

These modifications are all aimed at improving my aerobic ability at both ends of the spectrum — a more robust aerobic base combined with higher VO2max and CP.

There will also be a new focus on torque work. This will take several forms: lower-cadence blocks on base rides, the aforementioned bigger-gear-with-no-shifting on 15-30 second anaerobic efforts, and also using bigger gears on some of my short sprint drills.

I really think that strength building — both on and off the bike — is the biggest potential source of improvement that's still out there for me.

I want to see if this new approach will continue to give good results over a more extended period; if my numbers go up again on the next Test, I'll have good reason to believe I'm on the right track.

The latest version of my ever-changing In-Season schedule

I'm starting to get excited about my training again. Hopefully next year will be better for a whole number of reasons, and I'm optimistic that as long as I stay agile with my approach to training, my cycling will be one of them.