There's been some substantial changes this month.

I've remarked a few times about how my fitness has been consistently improving all year, and I still think that's the case. My heart rate variability (HRV, an indicator of autonomic stress) has been steadily increasing, my resting HR trending downwards, and my best efforts at a wide range of durations regularly improving. All that is good.

But, almost from the moment I published the May update saying how great everything was going, my form sharply declined. It took most of June for me to start feeling good again; over the last few weeks I haven't been able to perform to the level I'd expect on longer-duration efforts (around threshold).

During this time my volume and intensity distribution have stayed the same, I've been taking regular recovery periods, and my HRV and resting HR have remained great, so there's no reason to think my fitness has significantly declined. I think that the likely explanation for my decline in performance is fatigue, and because my heart analysis numbers are good, the fatigue's got to be peripheral (muscular).

I've mentioned before that I've been very consistent with my weight lifting over the last six months. From all the research I've done, it's clear that for endurance athletes, the best way to go about strength training is to lift heavy weights (80%+ 1 rep max) for few reps per set, with plenty of recovery between sets. This is the opposite to what many actually do, but it works to build neuromuscular strength and power, which is what's generally lacking in cyclists (there's no need to lift light weights for tons of reps — you're already building muscular endurance on the bike!).

But anyway, I'm confident that my weight sessions are good, but the problem is they do generate a lot of muscular fatigue. I've previously been doing these sessions on the same day as hard rides (rides in the morning, weights in the early evening), so what's been happening is I've been smashing my legs twice in the space of a few hours. It seems like I got away with this for a while, but eventually it caught up with me.

When I first realized this, I reduced the amount of anaerobic and neuromuscular efforts (Z6-Z7) I did on the bike on weight training days, but it's become apparent that this isn't enough, so now I'm going to try moving weight lifting days to coincide with easy days on the bike and see how that goes.

The reason I didn't do this earlier is that I was worried about having too many hard days (whether bike or weights) in a week. If the new schedule proves to be a problem, I'll have to switch the weights back to hard ride days, but further reduce the workload of the rides.

But the first thing I did was take a couple of weeks off weight lifting as a reset, and within a few days I could feel my legs beginning to come back to me. It was such a relief not to have to do any lifting on weekend evenings, when I do my toughest rides. Whatever schedule I eventually settle on, it's clear that I shouldn't be doing a tough 100 km ride and a heavy weights session on the same day (that sounds obvious now that I've written it down, but then again I am pretty stupid for a smart guy)!

I've also made a more fundamental overhaul to my training plan: I've always emphasized the importance of flexibility, but now it's explicit within the plan itself.

I've read research articles that compared traditional pre-programmed plans with training that was adaptive based on daily HRV values, with the adaptive plans showing better results. You can see the general scheme of one of these below. 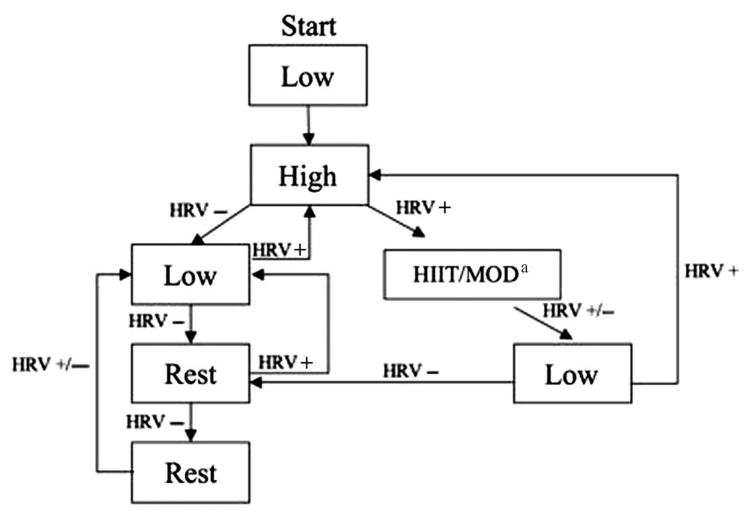 The general idea is that, after leading into a block with a low-intensity day followed by a high-intensity day, what you do thereafter is based on whether your morning heart rate variability score increases or not. If it does, you should be good to handle a relatively hard session; if not, you move to an easier session or rest day.

This has an obvious advantage over a fixed program: adjusting the training based on feedback from your body. But a significant disadvantage is that it's less able to adapt to time constraints (e.g. group rides or lack of time on specific days).

Therefore, my new plan takes a hybrid approach: flexibility with limitations. I generally reserve Mondays for rest and Fridays for short easy rides, to act as a buffer between the weekend and the midweek period. But the weekend rides can be swapped, as can the rides during the middle of the week. This is indicated by the dashed borders and two-way arrows in the ride table from the In-Season plan, shown below.

I'll now use a combination of HRV and resting HR plus subjective feelings (energy, mood, legs) to decide which ride (if any) to do on a given day, and also modify a session during the ride itself based on how well HR and perceived exertion match up with my power output on the warm-up.

This should allow me to train much more effectively, ramping up my effort when I can best handle it, and reining things in when I need to.

The other thing I've resolved is to lose my remaining excess weight. Three years ago, before I started cycling, I weighed around 115 kg (over 250 lb). I'm 180 cm (5' 11”) with a middling build. After I started cycling I lost over 30 kg within about 10 months, getting as low as 83 kg. Since then, I've fluctuated from there up to about 87 kg, but I think I could and should get a little lower.

I've arbitrarily set a goal to get under 80 kg, and the process is underway. I want to lose enough to achieve a lean torso. Once that happens, I'll take off another kilo and use that as a buffer zone.

It's really ridiculous that, as someone burning 8,000-10,000 calories per week just from cycling, I've never lost that last 10% or so. So I'm taking advantage of my fitness tracker (Fitbit Inspire HR, about $60) with its adaptive calorie monitoring, staying in the moderate weight loss zone each day. This allows me to lose half a kilo each week, which I've done for the last three weeks so far. I should hit my goal by the end of the summer.

In between working on all these changes, I've continued to hit some record power numbers and also to persevere with solo riding. Some group rides have started back up now, but I'm continuing to steer clear of them as I live in a high-risk household.

So I'll just be working on refining my training and losing weight, which serves both as good motivation and a distraction from everything else that's going on.