Building on last month, this was another great training block: probably my best yet. Certainly recent weeks have seen the biggest sustained gain in fitness I've had for at least two years (back when I'd just started serious group rides).

My build weeks were 14, 16 and 18 hours, and I've now definitively moved to only two hard sessions per week. Wednesday and Saturday works well and allows me to go deep and recover enough to go again next time out. Trying to squeeze in a third hard ride just reduces their quality and builds too much fatigue. That's not going to happen anymore.

Now the basic weekly structure consists of rest/recovery on Mondays, base training on Tuesdays and Thursdays, hard intervals on Wednesdays, leg speed on Fridays, a tough group ride (or solo free ride at the moment) on Saturdays, and an endurance ride on Sundays. This with a progressive increase in volume over the mesocycle, followed by a recovery week with reduced volume and only one hard ride (more on this below). Simple, but it's been very effective for me.

I've also been consistent with weight training on the evenings of my hard ride days; I've noticeably bulked up my lower body and am lifting much heavier weights than even a few months ago. I feel much more powerful on the bike, and this is translating into my numbers, which are up across the board (from 1 second to 3 hours).

So stringing together several months of consistent training really works! No overtraining, no chopping and changing, just going out and sticking to the plan. Hard rides are hard, easy rides are easy, with rest whenever I need it. It just took a couple of years of screwing up for it to sink in.

But I didn't get the mesocycle perfect; I started to run out of steam just before the final weekend. This was probably mostly down to riding a continuously hard 3 hours on the middle Saturday; the kind of ride that should be reserved for the final weekend due to the large amounts of fatigue it generates. I've just been feeling so good that I couldn't resist it, but for the next block I'll be more patient.

Basically, I went out and decided to do a metric century as fast as I could. I averaged 244 Watts (83% FTP) and 154 bpm (82% HRmax). I judged it pretty well; there was very little heart rate drift and aerobic decoupling of just 5.5%. But anyone who's done that kind of effort will know that it takes a lot out of you. 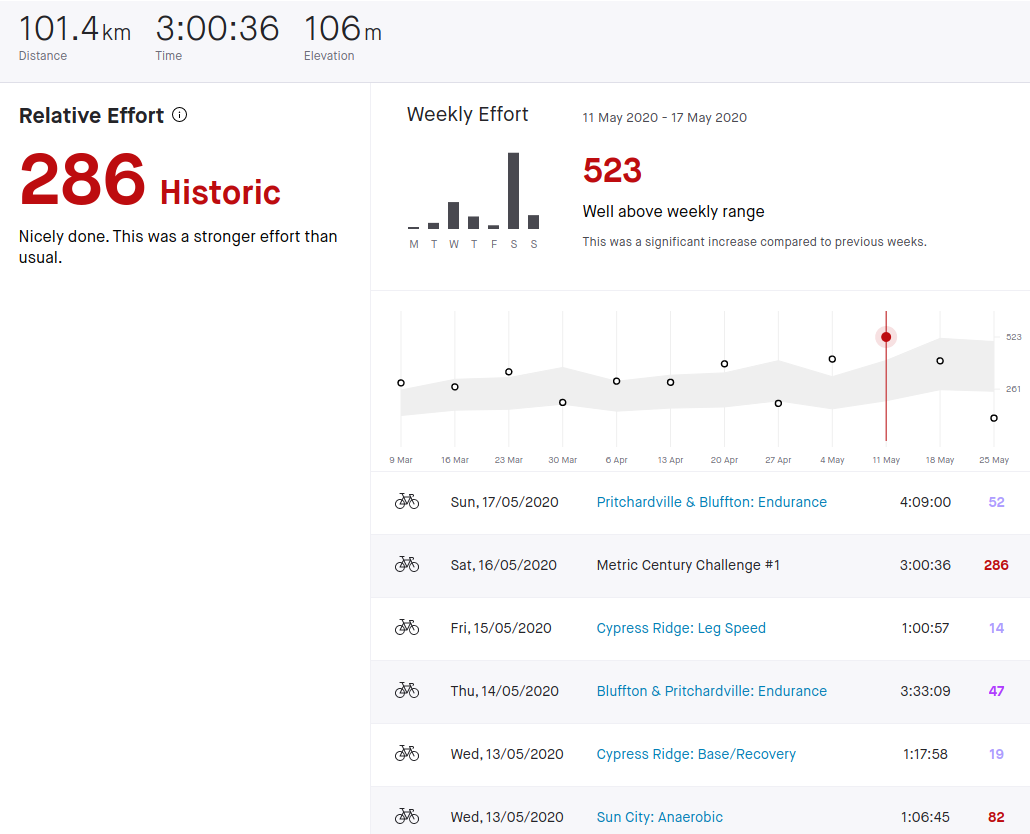 You can see what I mean here: Strava's excellent Relative Effort score shows the ride making up 55% of the weekly training load, despite being only 3 hours out of 16. Incidentally, this is much closer to reality than the typical power-based metric of Training Stress Balance that a lot of people use, which gave the ride a TSS of just 218 out of a weekly total of 774 (28%). Clearly nonsense.

Also, compare the 4-hour endurance ride I did the next day: Strava gives 52 Relative Effort (10% of the weekly load), whereas for TSS it gets 163 (21% of weekly load). This was a very easy ride, with an average HR of just 118 bpm. It wasn't hard for me at all. Strava gets this, the TrainingPeaks boys don't. Of course, both metrics are just approximations, but in my experience Relative Effort is much the more accurate. 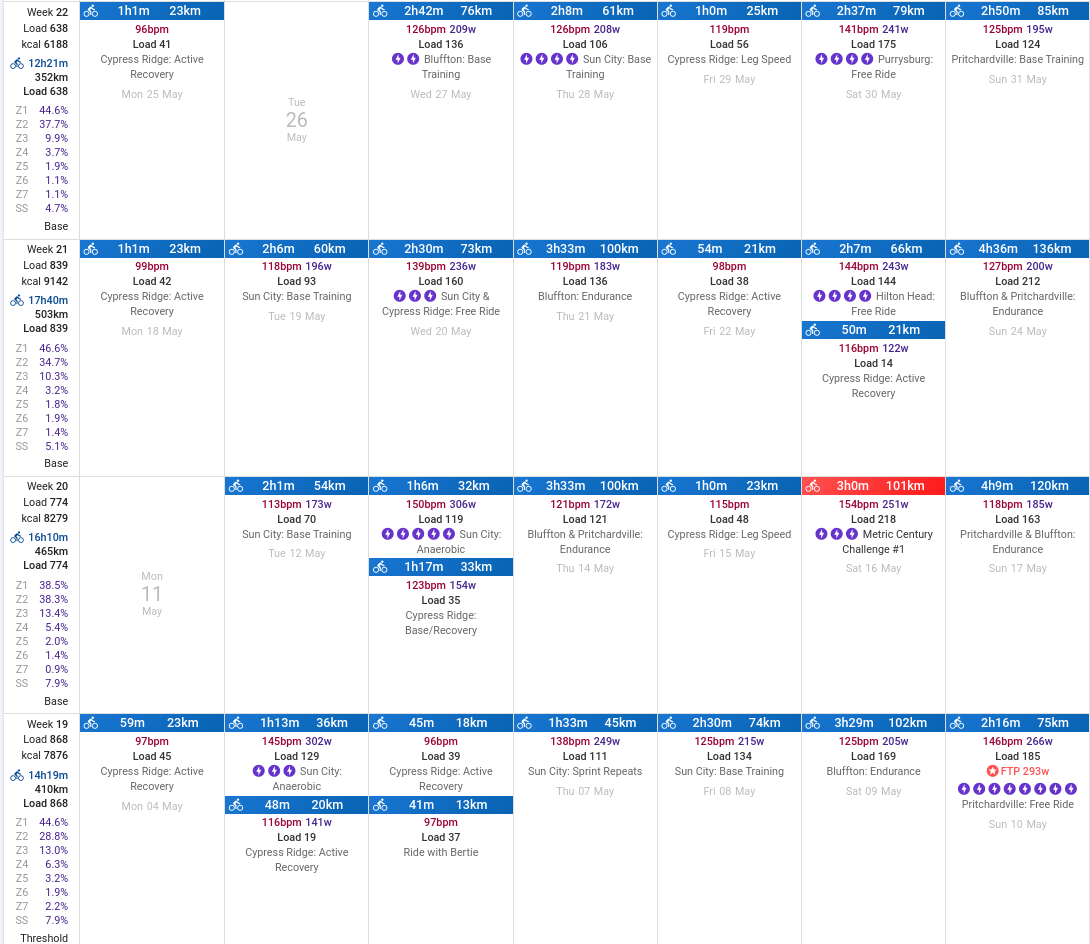 My rides over the mesocycle, courtesy of intervals.icu

In any case, you can see (from the Strava screenshot) how I tailed off a bit the following week, due to quite high levels of fatigue. Not a disaster, but clearly it will be better to save that kind of ride for the end of a training block rather than sticking it in the middle.

Notice from the intervals.icu screenshot that I've been getting a lot of lightning bolts! These happen when you achieve season's best power numbers, one bolt per duration (the ones on the base training rides this past recovery week were for sprints from 1 second to 10 seconds, a few of which I add to these rides to keep myself sharp). Like I said, I've been in good form lately.

Here's how I'm doing relative to other 40-something-year-old intervals.icu users:

And below is my current power curve. In the top right corner are values for Critical Power (CP), Anerobic Capacity (W') and Max Power (Pmax), with a comparison with all Golden Cheetah users: 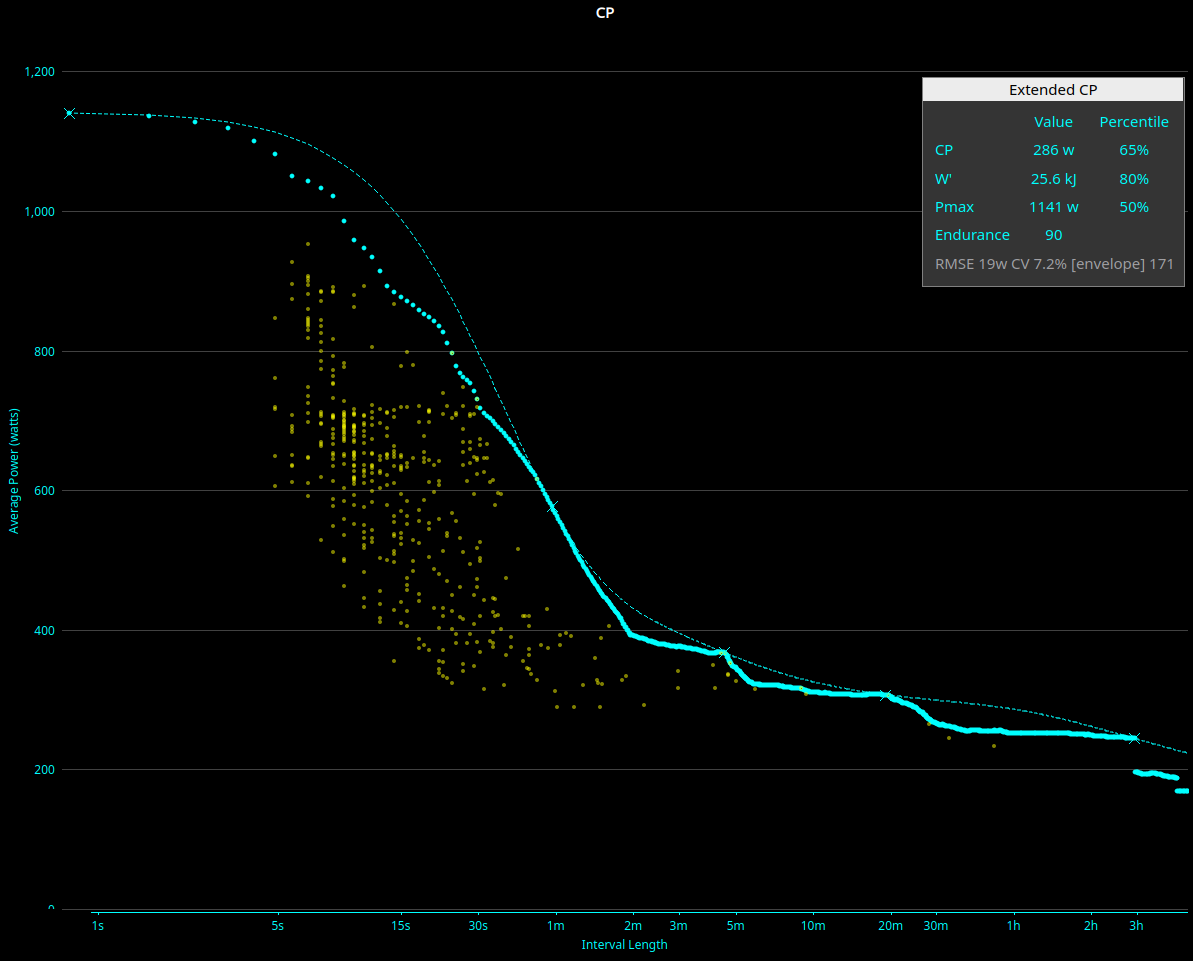 Both charts show that my strength is my anaerobic-glycolytic system; my peak power has increased quite a lot this year but is still not great, my critical power (close to FTP) is pretty good, but my anaerobic capacity — as manifested in 15-60 second efforts — is the best weapon at my disposal. So I'm neither a pure sprinter nor a time trialist, more of an all-rounder with a decent kick.

My plan is to continue working on both my peak power and my critical power. Any improvements in peak power translate into gains over longer durations, and of course the higher my lactate threshold, the more of my kick I'll have available at the end of a fast lead-up to a sprint. A high threshold will also mean I'll be able to get into and stay in more breakaways, and hopefully be the best sprinter who makes the selection. That's got to be my game-plan.

I'm not sure there's much value in targeting specific numbers, but currently my CP stands at about 77% of my VO2max power (which is approximately equal to 4-minute power). Elite riders can have values over 90%, but they've got huge cardiovascular capacity plus mostly slow-twitch muscle fibres. I don't have those things, so there's no way I could get close to 90%, but maybe I can still squeeze out a little more.

That's the best thing about having a power meter: using it to track progress (or it's absence). I don't pay much attention to it when I'm on the bike, and like I said I'm not a fan of using it to track training status, but it's undoubtedly the best and most ruthlessly honest arbiter of performance.

How can I work on my anaerobic and aerobic systems at the same time? By continuing to do what I've been doing — a mixture of mostly long mostly easy rides and a couple of very high intensity (anaerobic and neuromuscular) sessions each week, with relatively little work in between (threshold-VO2max).

The problem with peak aerobic work is that it trains the type-IIa muscle fibres to be more aerobic, and hence less glycolytic. This could add a few Watts to my threshold and VO2max values, but at the expense of my top-end power. So I'd be sacrificing much of my anaerobic ability for a relatively small amount of extra aerobic capacity. For a triathlete, say, this would be a good trade-off, but not for me.

So I improve my aerobic ability mostly through endurance riding, targeting the type-I fibres whilst sparing the type-II fibres for the hard days. My high-intensity work is mostly sub 60-second anaerobic efforts and 5-10 second pure sprints, manifested in my Anaerobic and Sprint Repeats workouts.

My training isn't completely polarized though: typically I do a tough mixed-intensity group ride on Saturdays which includes plenty of hard aerobic work in addition to endurance and anaerobic work (at the moment I'm trying to replicate this riding on my own). But one day per week is enough; the rest of the time is very hard on Wednesdays and everything else easy (with a bit of wiggle room on Sundays; if I'm feeling good I might do a little more than on a pure endurance ride, and still have 72 hours before the next hard ride). And as I've shown, this has been working well for me.

For a while now I've scheduled a threshold test at the end of each Recovery week. These generally haven't gone all that well, and I think I finally realized why: I'm too fresh!

Though having formerly shunned it, this year you could set your watch by my scrupulous adherence to recovery. Monday-Friday of each Recovery week is completely void of all high-intensity work; just rest, recovery rides and base training. While necessary, I think this has the unfortunate consequence of reducing my blood volume, meaning that my first hard ride following a recovery period isn't reflective of my true fitness. My heart rate tends to be elevated and my performance consequently reduced.

This cycle was no different. I went out yesterday and my legs felt great, but already on the warm-up my heart rate was much higher than normal. I did go out a little too hard on the planned 30-minute effort (which was abandoned before the halfway point), but the only way I could have made it through would have been to drop well below what I know I'm capable of. You can see on the monthly training chart above that did my best long effort at the end of Build 1, so I'm going to try again this time at the same point in the cycle.

So on to the next cycle, where I'm going to be Building from 16-20 hours over three weeks. If all goes well, I'll try the full 4 Build weeks for the following cycle. There have also been a few more tweaks to the plan, in particular cementing the 'two hard rides per week' rule, moving the Profile Test to the Saturday of the first Build week, and eliminating the Taper week before the Event week.

Right now I'm delighted that my progression is continuing so strongly. It's a shame I'm only riding solo at the moment, but as long as I stay healthy and keep improving I'll have no complaints whatsoever.