The big change this mesocycle was taking seriously the need to taper my training in the lead-up to my race. In accordance with scientifically-accepted best practice, I didn't reduce the intensity or frequency of my riding, but the volume came down by about one third.

Following Monday's Leg Speed ride, I did some tough Anaerobic Intervals on Tuesday. The first two were 2-minute efforts, which are horrible; you don't pace them, you just go flat out like you were doing a 30- or 40-second interval, then try to hang on as best you can. Nasty! These were followed by six 1-minute reps. Ten minutes of anaerobic work is plenty for one session.

On Thursday I did far more pleasant Neuromuscular Intervals. These are simply 10-15 second sprints. The energy system used is the alactic ATP-phosphocreatine system, meaning these intervals don't hurt; they use energy your body prepared earlier. A nice 5-minute rest between reps lets you top up your stores, and off you go again. They're fun, nicely complement aerobic riding, and can actually be added to any ride (except an Active Recovery). Even if you're a recreational rider rather than a racer, they're worth doing.

The taper continued with a 75-minute Pre-Event ride (rather than the 3-hour slugfest I did before my previous race), in which I did just enough brief efforts to stay sharp without adding much fatigue.

So I was much fresher for the race this time, and I did much better. Rather than being dropped from the bunch with 3.5 laps to go like last time, I stayed with them until the end (despite the race being significantly faster). I also tried to save energy by hiding away near the back of the field, with the intention of moving forward near the end. This actually turned out to be very easy, as the penultimate lap was by far the slowest of the whole race, so it was no problem at all to move up to the front going into the start of the final lap.

Unfortunately, I didn't have enough energy left to keep my position, gradually slipping back through the pack as we went through the final few corners, and so wasn't able to contest the final sprint. I got somewhere around tenth place (out of about twenty). 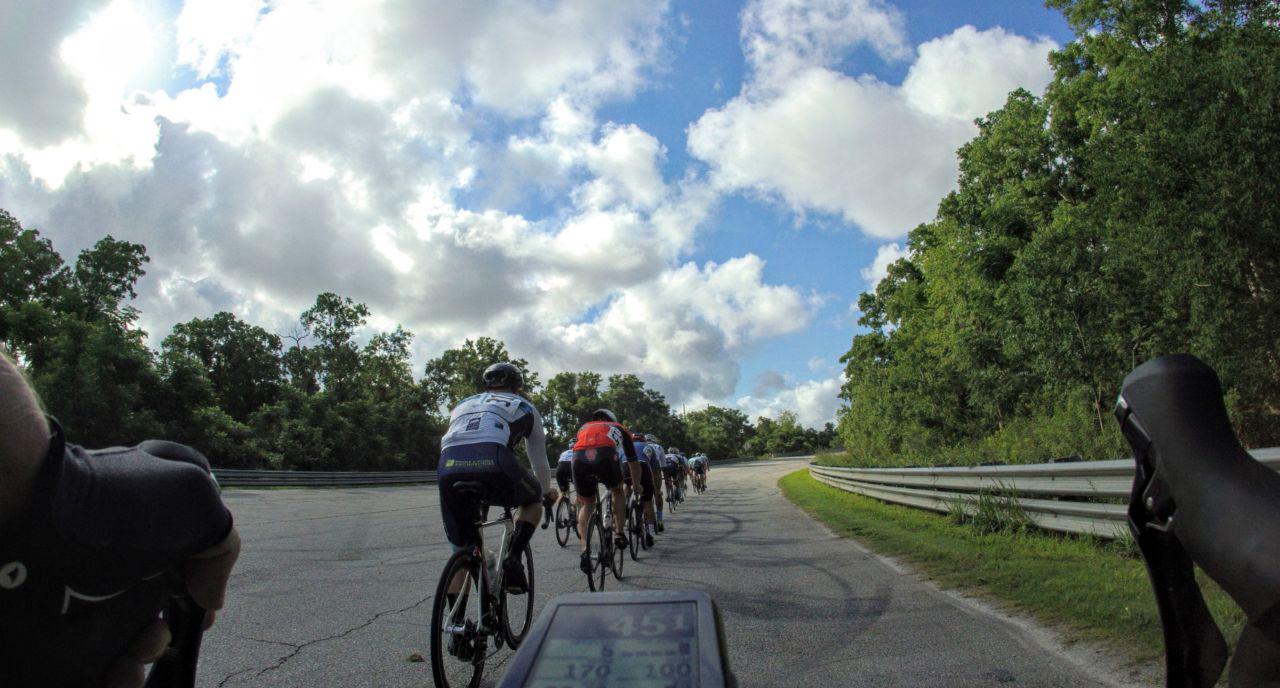 Early in the race, and the field is strung-out due to the fast pace

Despite the much better performance, it still had me thinking about exactly what's missing. I'm nowhere near as strong as I was in the back half of last summer when I was one of the stronger riders on the Savannah unlimited ride, or even as I was in March, when I was putting in big rides and even got a few KOMs on short Strava segments. Is this just due to my injury, or is it something else? I think it's probably a bit of both. I've actually been thinking about this for a while, and all this ruminating has led me to make a couple of big changes to my training.

First of all, I've finally succumbed to the lure of the power meter, and ordered some Favero Assioma pedals. Of course, I've been aware for a long time of the touted benefits of training with power (knowing the exact level of effort without having to judge by perceived exertion, tracking of training load and specificity, quantification of improvements over time, etc.) but these were never enough to sway me before.

However, I've come to the conclusion that my injury (which is still slowly improving two and a half months later) was most likely caused by a combination of a left-right pedaling imbalance combined with poor bike fit. I've had the latter problem fixed on each of my bikes, raising my saddles back to where they should have been and modifying the reach, but now I want to reduce as much as possible any disparities between my left and right legs.

My left leg is naturally dominant, so I tend to drive the left pedal harder than the right when I'm cycling. The hundreds of hours of riding I do each year have undoubtedly increased this difference, since my left leg has been trained harder than my right leg. As I drive the left pedal with the large muscles of my glutes and quads, the smaller muscles of my right leg (e.g. hip flexors) will be working to bring the right pedal back to the top of the stroke, potentially leading to their overuse. This is compounded when the saddle is too low, as the knee must be lifted higher and through a larger dead spot at the top of the pedal stroke. I think that's what happened with me, back in late March, just as I was increasing the intensity of my riding.

So my idea with the power meter is that, since I got the dual-sided version, I'll have separate data on the left and right legs, and thus the ability to examine any differences between the two. I suspect I've been starting the drive phase a little later and with less force on the right side; I've already been trying to avoid this, but if I'm still doing it this will be apparent from the data. I'll be able to see my left-right balance and other metrics live on my bike computer as I ride, so that I can consciously fix the problem (I'm not sure that it's either possible or desirable to completely eliminate the difference, but I think it'll help at least to reduce it if it's substantial). Hopefully after a few weeks I'll have internalized this enough so that it will become automatic.

Of course, I'll be able to make use of the power meter in all the traditional ways as well, and over the next few weeks I'll be reading up on how best to do so. But my main priorities for the rest of the summer are to make a complete recovery from my injury and to find and eliminate any bad habits with my cycling technique, so the injury will hopefully never recur.

The second thing I want to change is something I've been thinking about for many weeks, which is that I need to make some big changes to my actual training plan.

I do a much bigger volume of riding than most amateur cyclists, which is great but also requires adjustments in training. Based on all the scientific research I've read, my own experience, and just looking at what the best cyclists do, the conclusion is inescapable that high volume is the most important part of training for all endurance athletes. That's why all top road cyclists (including criterium and sprint champions) and even most track cyclists (not including the sprinters, since in their event they only have to ride a couple of laps) put in a huge volume of low-intensity riding, with the addition of a much smaller amount of event-specific higher-intensity work.

When this isn't possible, usually due to time constraints, compromises must be made. That's where intervals come in, and they often seem to be the best (or least bad) option for time-crunched cyclists. I've been working on an intervals-based training plan for a long time, gradually modifying it based on my own research and experience, but I've now concluded that I'm simply trying to cram in too much. I need either to reduce the volume or the intensity.

When I've felt my strongest, last summer and early this spring, I was doing a lot of long rides. Starting in early August last year I went 14 straight weeks averaging over 550 kilometres per week. I was doing back-to-back tough group rides each weekend, and attempting to do intervals during the week. That eventually ended in me overreaching, but that was only towards the end of the 3-month period, and only then because I wasn't smart enough to add in the occasional recovery week.

Similarly, in the spring this year when I started showing signs of some speed, I was coming off a couple of months of doing multiple long endurance rides each week, and relatively little higher-intensity work.

So I certainly respond very well to volume, and in the summer I can get this and all the intensity I need at the weekends via long, fast group rides; I don't need to be doing regular intervals rides during the week as well, and in fact that is probably counterproductive.

Take a look at this chart: 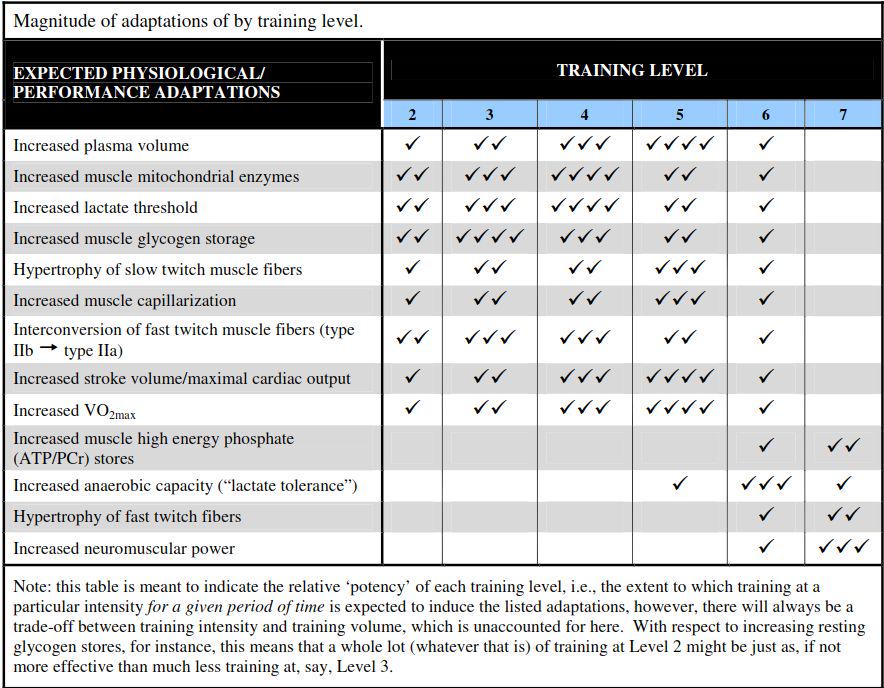 Training and Racing with a Power Meter. Allen, Coggan & McGregor

What you see is dichotomous training levels: Zone 2 thorough to Zone 5 are basically interchangeable; if you do some 4- or 5-hour endurance rides you'll be working on the same things as if you do some threshold or VO2max intervals. All these zones are working the aerobic (oxidative) energy system. But (unlike intervals) you can do the endurance rides on multiple consecutive days, even adding in the occasional higher-intensity effort if you like. As you can also see from the figure, you still need to do some anaerobic (Z6) and neuromuscular (Z7) work; the Z6 work will be done at the weekend, and Z7 (as already stated) can be done any time.

My idea now is to do around 3 Free Rides during the week (2-4 hours each), mostly between Z2 to low Z3 (just above aerobic threshold), including some higher-intensity blocks from time to time, probably in the form of Strava segments. With these plus some recovery and leg speed rides I can easily accumulate 12 hours of quality riding, and still be ready for another 8 hours or so of back-to-back group ride action at the weekend. These summer group rides give me plenty of higher-intensity work, so intervals during the week aren't needed. I also do my best efforts in a competitive setting, another reason I respond so well to group rides (and Strava segments). And they're fun! Hammering out intervals on my own is not.

But I will add some more structure in the last 8-10 days leading into each race (probably still doing fewer intervals per ride than previously, though), but other than that I'll work with the plan outlined above, with another important caveat: if I'm tired, I take it easy. If I'm still tired the next day, I take it easy again! This is a pretty simple concept, helped also by the Free Ride, which is (as you'd expect) very flexible in both duration and intensity.

This has turned into a little more than just the usual brief summary of my training week, and I'm still in the early stages of making these changes. But basically, I've got a five-week mesocycle leading into my next race, during which period I'll be getting used to using the power meter and experimenting with how best to modify my training. If you hadn't guessed already, I confess that this kind of thing is half the fun for me.