Recovery was the theme this week, and what do you know: it actually seemed to work!

Unfortunately, I can't know for certain just how much it worked, as the race I'd tapered for fizzled out in a rather strange way. More on that below.

The good news is that I've finally got the discipline to stick to the training program; taking sufficient recovery has always been the hardest part of training for me, but now it seems like I really do get it. The withdrawal symptoms were pretty bad, but with a huge effort of will I manfully restricted myself to 10 hours riding for the entire week!

However, one thing I've been aware of is that, now that I've sorted out my training volume, my weak point is becoming what used to be a strong point: my high-end power. My endurance and FTP are heading rapidly in the right direction, which has made my lack of anaerobic energy increasingly obvious.

So this week I did do a couple of anaerobic/sprint intervals sessions. I've read the science and it's pretty clear that for a taper you should reduce the volume by around 50%, but keep the frequency and intensity high. So that's what I did.

I'd wanted to do the first session on Tuesday, but I was still feeling fatigued from the big 4-week block I'd just completed, so I shifted it to Wednesday. This was a sprint repeats workout, slightly modified from the 20/40s I did previously. Now the work blocks are 15 seconds flat out, with 30 seconds recovery and a total of 4 sets x 6 reps per set. Pretty tough, but not crazy.

This was followed up on Friday with a shortened set of anaerobic repeats; two sub-60 second ones plus a killer 2-minute effort, followed by a couple of max sprints to finish.

Next time, I want to stick to Tuesday and Thursday for the intervals, so I can really go for it both days without worrying about not having enough time to recover for the event. That might require backing off a little more on the preceding Sunday.

By the Pre-Event ride on Saturday I was feeling pretty good. I kept it to 60 minutes, with 2 x 2-minute efforts around 340W (120% FTP) and 3 x 8-second sprints. This has become my standard ride the day before a race; it keeps me sharp without causing much fatigue.

So then we get to the race. I was feeling great; much stronger (and fresher) than I was for the first two races of the season. On top of this, the pace was noticeably slower and less uneven than last time out. The combination of these two factors made for a much easier ride. My average heart rate of 144, as opposed to 167 previously, tells the story: 167 is my threshold HR; 144 is just above endurance pace!

So, I was expecting good things. I followed my usual strategy of hanging out near the back of the field, ignoring any breaks (which always get reeled in), saving energy. Then, with little over 30 minutes gone, I heard a bell ring and looked across at the race director, who seemed to be indicating that it was indeed the final lap. Previous races have always been 45-50 minutes, so I was a little confused, but nevertheless made my way towards the front of the bunch around the back of the lap, ready to sprint.

Also in previous races there has been a Juniors race that started at the same time as my race, but finished earlier. And indeed, most of the riders around me seemed to think that it was the Juniors that the bell was directed at. Someone even encouraged one of the junior riders (who were riding in the group with us) to sprint off the front for the end of the race! So I eased off and gradually fell towards the back of the peloton again.

After we crossed the line at the end of the lap, I noticed one or two guys sitting up and looking like they'd just sprinted. The majority of the field just kept riding until the end of the next lap, when frantic race officials signalled to us to stop because the race was already over. There wasn't a Juniors race this week.

So a little bizarre, and I never got to see just how much I've improved since last time out. I also didn't even feel I'd had a decent workout, since the race was relatively easy with no sprint at the end. So I did a post-race circuit over the bridge, taking another 6 seconds off my Strava PR on the climb in the process. The Talmadge Memorial Bridge Climb has now become one of my main segment targets for this season: I'm currently in 19th place (out of 900), but I think I can get up to 6th or so before the year is out, although the top 5 are very fast and probably beyond me. 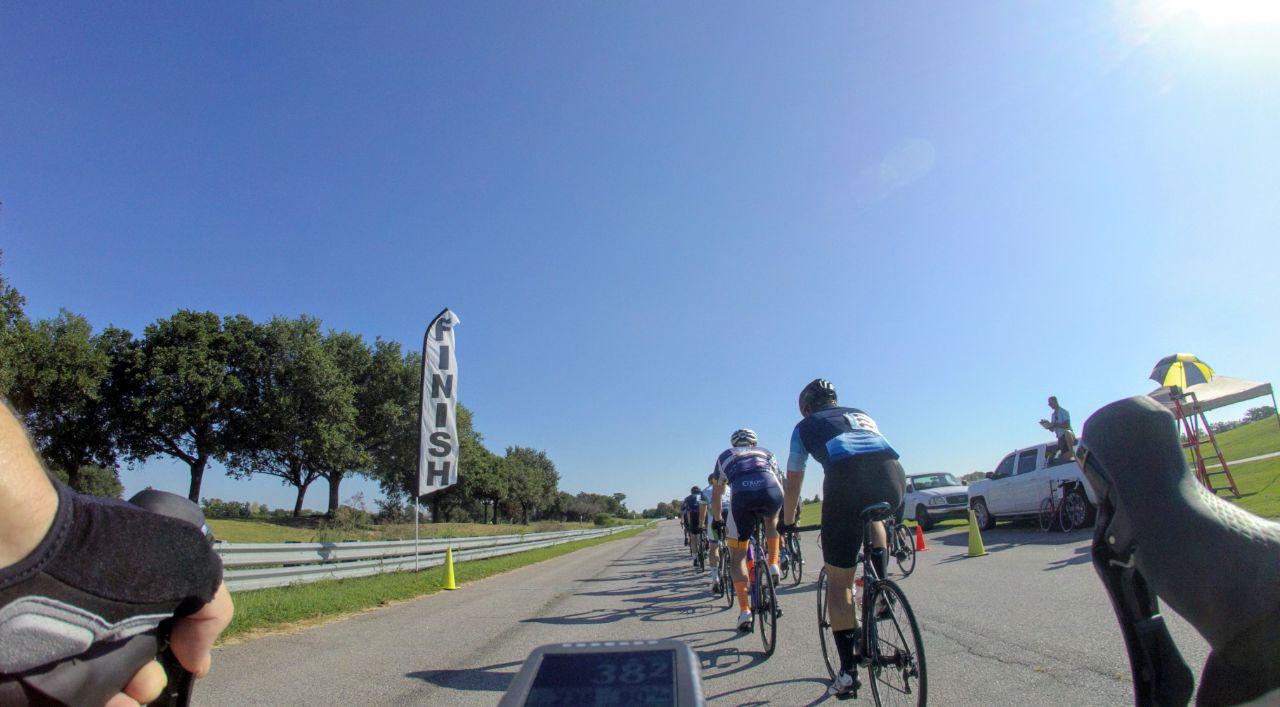 They even moved the start/finish line

But all-in-all, I'm not that bothered by the anticlimactic ending to the race, because my main focus is on the Savannah Century, now just 8 weeks away. According to my new training software, if I maintain an aggressive training schedule between now and then, I should be able to reach an FTP of 300 W by then.

Judging by last year, the pace of the front group is right on 25 mph, which if I hit my target should make the ride not too difficult at all; even when I'm pulling on the front I should be right at threshold, and further back in the group I'd probably be below aerobic threshold. It's just a question of training right and building up even more stamina between now and then.

No lower-body weightlifting again this week; although I haven't been moaning about my leg injury very much recently, I still have numbness along my right tibia, and often following a hard ride can feel a little swelling just above my knee, which I think is from my vastus medialis or possibly the quadriceps tendon. There is also a 'trigger point', where it sometimes feels like my knee is going to give way.

I now think this traces back to weightlifting. I've been doing these for some time, and I think my technique may have put too much strain on the supporting leg. So I'm avoiding weightlifting for now, and should probably get it checked out by a professional.

In the meantime, I'm off to the mountains of North Carolina in a couple of weeks, for the Boone Gran Fondo plus an extra day or two of hilly riding. It'll be nice to get away for a while, and great training to ride up some climbs.