This was the second week of the VO2max training mesocycle.

The intervals were okay. This week I moved from 5 to 6 reps per session, as planned. Just like last week, my performance on Tuesday was better than on Thursday, presumably due to the extra day's rest I get.

I do lower-body weightlifting and plyometrics on the same days as my hard rides (Tuesday, Thursday, Saturday), with riding in the morning and lifting/plyometrics in the evening, so my legs get a pretty good hammering and thus need time to fully recover. The extra day makes a difference.

During the main season I'll drop the Thursday strength work altogether, just doing two lower-body sessions per week, but for now my lack of freshness isn't important (as long as I don't overreach, which I'm carefully avoiding). 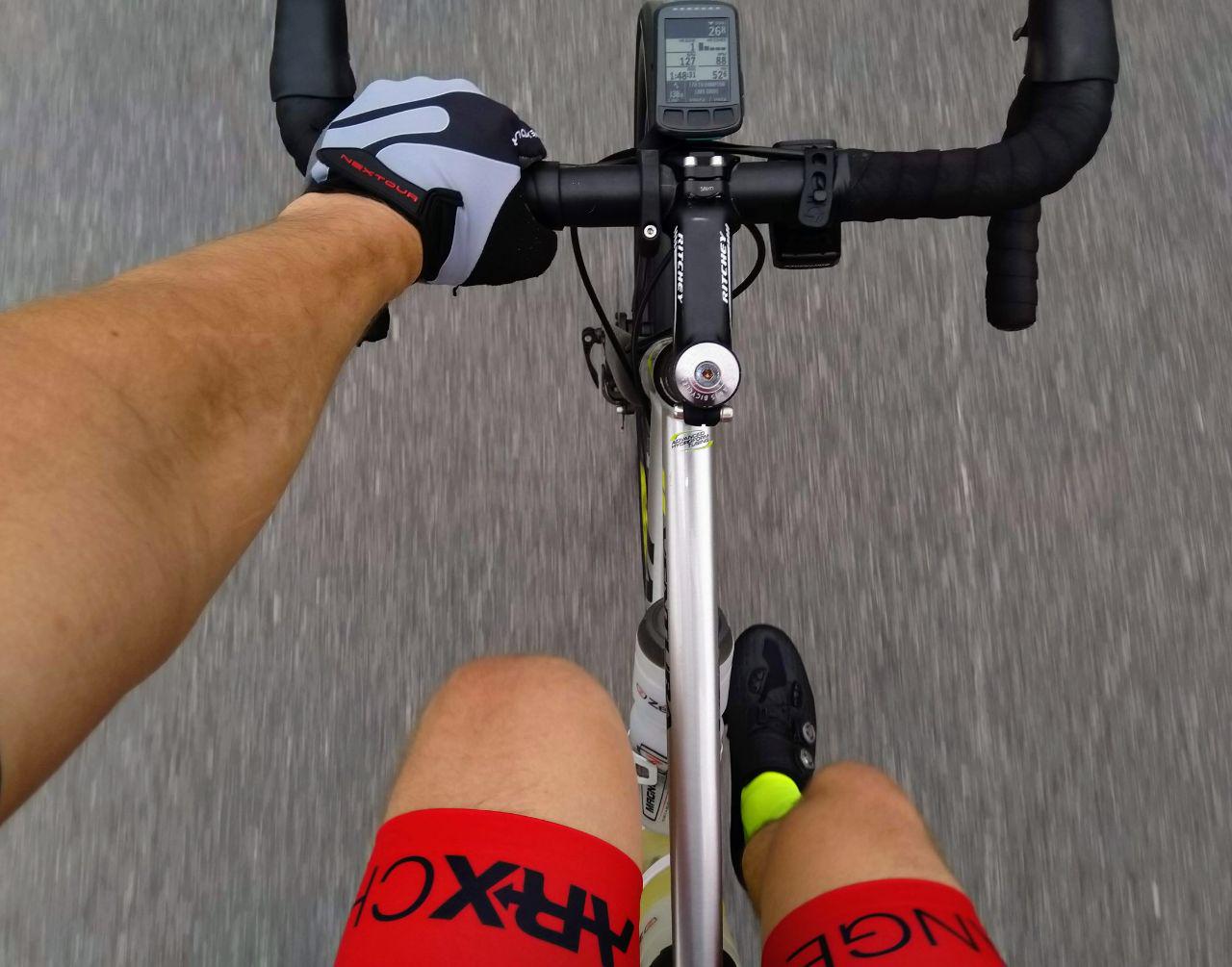 high-visibility socks are a good idea when riding alone

Wednesday was the first day this year that I didn't ride at all (due to lack of time). It was awful; so bad that I briefly considered buying a set of rollers, before sanity reasserted itself.

The rest of my weekdays had the usual low-intensity extended commute rides, including my leg-speed work on Friday, which is now up to 20 minutes at 135 rpm. I'm a very enthusiastic convert to this type of training, and now also incorporate at least a few minutes to the warm-up of every training ride. If this isn't something you do, give it a try!

Saturday's ride wasn't a good one.

I went to Savannah for the group ride there. During the season it's the fastest ride in the area and thus offers both a good workout and a test to see how you're doing relative to everyone else.

This week, however, things didn't work out so well. Firstly, there was a criterium down in Jacksonville the next day, so several riders who'd normally be in the fast group were taking it easy further back, leaving the front group quite diminished. This wasn't really a problem, though, because the pace was still sufficiently brisk for February, averaging 40 km/h (25 mph) once it got up to speed.

The problem for me came about 20 minutes into the faster section, when I repeatedly had jolts of excruciating pain from my saddle. At that point there were only 3 of us left (riders had been regularly dropping off the back), so I was having to do quite a lot of work on the front, and had been low in the drops for much of this time.

As we approached a sprint point the pace increased even further, and that's when the pain started. It was enough to make me sit up and drop back, and then for much of the remainder of the ride I just couldn't get a comfortable position on the saddle.

I'm thinking I might want to try other saddles, but my bike shop guru said the problem is likely caused by my lack of time riding hard in the drops over the last few months. He suggested I train more frequently in my racing position, gradually building up the time and intensity. So I'll work on this for the next few weeks and see if that helps.

It's true that this was the first ride where that's happened for a long time, so it's probably no coincidence that it's also the first ride I've had such an extended high-intensity effort in the drops.

Possibly because I ended up sitting off one side of the saddle to alleviate the pain, some of my leg muscles felt a little tender later in the day, so I decided to skip the evening's scheduled weight lifting, and by Sunday my legs felt fine.

Sunday was a typical local recovery ride. I set off too early for the group ride so I had only myself for company again, but it was a nice, relaxing way to finish off the week.

So I'm way ahead of the curve on my lower body strength, a little ahead on my back strength, on target on my chest, and behind on my shoulders and arms. As a cyclist, I'll definitely take that, especially as this reflects the amount of training time I spend focusing on each of these groups.

I was a under on my medium-intensity time this week (my target is currently 15%); if this happens from now on I'll make up the difference with tempo riding on Sunday's recovery ride, although I'll try to make sure that's not necessary.